If you think medical marijuana is a contemporary craze, here’s a surprise: No less a sage than physician-rabbi Moses ben Maimon prescribed plant-based drugs with psychoactive effects in Cairo during the Middle Ages.

To treat melancholy patients, Maimonides, as ben Maimon is known, chose from 100 separate drugs, some with sedative effects. Several, such as basil, grapes and pepper, are familiar from the garden or supermarket. One unusual animal-based product topped these on the rabbi’s list — castoreum, a liquid secreted by beavers.

We may never look at Maimonides the same way, thanks to a new anthology in which he appears in several chapters, “Medicine: From Biblical Canaan to Modern Israel,” co-edited by Drs. Kenneth Collins and Stuart Stanton. Similarly, this groundbreaking book gives readers a chance to reappraise the role of medicine itself in the land that now forms the State of Israel and some of its surroundings.

“We covered everything from the Bible to modern times,” Collins said in a joint Zoom interview between the editors and The Times of Israel, ahead of the in-person July 27 book launch in Jerusalem.

One of the contributors, Prof. Markham Geller of the Department of Hebrew and Jewish Studies at University College London (UCL), wrote a chapter on Babylonian medicine incorporating his knowledge of cuneiform.

“[That’s] not an easy chapter to write — a really profound chapter on the early stirrings of medicine that ties in with questions from the Talmud,” Collins said. 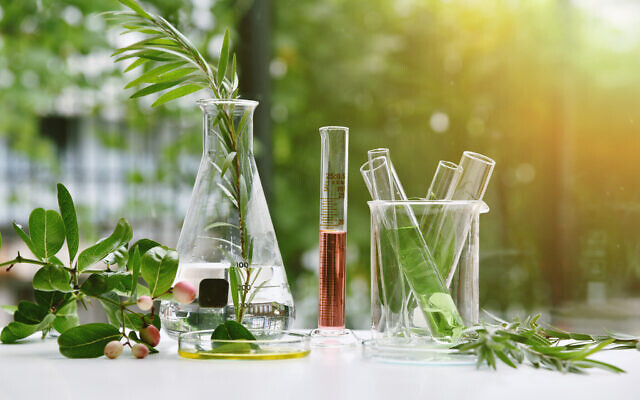 Health seems intertwined with Judaism — think chicken soup, or the mi shebeirach prayer read aloud in synagogue on Shabbat and holidays. But medicine also plays an important role in other religions.

The anthology examines the long Islamic era from the eighth to the 18th centuries CE, including the contributions of physicians such as Ibn Sina (Avicenna) and Ibn Rushd (Averroes). Maimonides — or Musa ibn Maymon in Arabic — served as the personal physician to the Muslim sultan of Egypt, al-Afdal.

The book covers traditional Arab and Jewish medicine, as well as medicine under the British Mandate and in the decades after Israeli independence — including how Israel solved a 1950s polio epidemic through a vaccination drive not unlike the country’s current approach to the coronavirus pandemic.

In the 1950s, with children in Israel endangered by polio, Dr. Natan Goldblum traveled to the United States to learn how fellow Jewish medical professional Dr. Jonas Salk made his groundbreaking vaccine. Goldblum returned home to help Israel become just the third country to produce the vaccine domestically, following the United States and Denmark, leading to a decrease in infections. 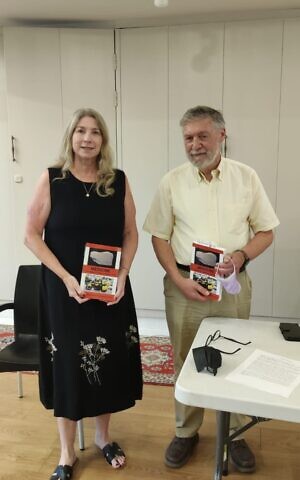 ‘Medicine’ contributor Nava Blum is shown with co-editor Dr. Kenneth Collins at a book launch at the HaZvi Yisrael Synagogue in Jerusalem on July 21, 2021. (Courtesy)

Nava Blum, a senior lecturer at the Max Stern Academic College of Emek Yezreel, has written about Goldblum multiple times, most recently for the anthology in a chapter on rehabilitative medicine that she co-authored with Dr. Avi Ohry of the Department of Rehabilitative Medicine at Tel Aviv University (TAU).

“It was really fun, kind of an adventure, to learn all about it — [Goldblum’s] role, his research,” Blum told The Times of Israel.

In Israel, she said, “no one knows about it. No one. I am sure his name is not familiar here at all.” With a laugh, she added, “maybe in the US he is known better than here.”

The ongoing coronavirus pandemic does get mentioned in the book, and there is a sadly prescient chapter about Israeli contributions to emergency medicine — a topic of recent headlines following the collapse of the Surfside condominium in Miami.

The seed is planted

The project originated in a course in the history of Judaism that Stanton attended at UCL in 2017. The syllabus included the German Templer sect that began settling in then-Ottoman Palestine in the late 19th century, which piqued Stanton’s attention. 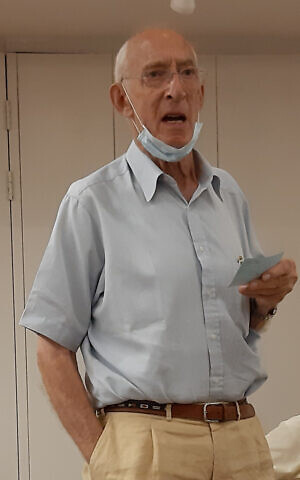 “They brought with them farmers, architects, economists, agriculturalists, doctors and medicine,” said Stanton, a widely-published expert in urogynecology. “It struck me as an interesting idea, medicine in Israel, something that could be written about. My wife is a great inspiration. She said, ‘It’s a good idea, get on with it!’”

Stanton discussed the idea with Ohry, who introduced him to Collins, a native of Scotland who emigrated to Israel. Collins is the co-editor of the Israeli scientific history journal Korot and the former editor of Vesalius, the journal of the International Society for the History of Medicine. As such, he brought valuable contacts — including his co-editor at Korot, Samuel Kottek, who wrote the chapter on biblical and Talmudic medicine and science.

Judy Siegel-Itzkovich, the former longtime health correspondent for the Jerusalem Post, co-wrote a chapter on modern Israeli medicine with Collins and Stanton. Stanton praised Siegel-Itzkovich’s contributions in the chapter, which “showed us and everybody else what Israel has given the world.”

But the book covers a lot of history before the establishment of modern-day Israel. There is a chapter on classical Islamic medicine by Aref Abu-Rabia, an anthropology professor at Ben-Gurion University of the Negev, and a chapter on Ottoman medicine by Prof. Miriam Shefer-Mossensohn of the Department of Middle Eastern and African History at TAU.

In sickness and in health

By the late 19th century, the Ottoman Empire that had governed Palestine for centuries was known as “the Sick Man of Europe.” Around that time, Jewish philanthropists from the Rothschilds to Sir Moses Montefiore competed alongside European powers to build hospitals in Ottoman Palestine. For many of the Jewish backers, building hospitals was intertwined with their efforts to establish a Jewish state.

To that end, in the early 20th century, Henrietta Szold founded Hadassah, which continues to exist not only through its organization but the Jerusalem hospital campuses it helped establish.

“The Zionist movement really wanted to create a new Jew, a healthy Jew, working in the field, not living in the crowded ghettos of Eastern Europe,” Collins said. “One of the things they wanted to do was make sure the population would be healthy.” This continued during the British Mandate, as chronicled in a chapter Collins wrote. 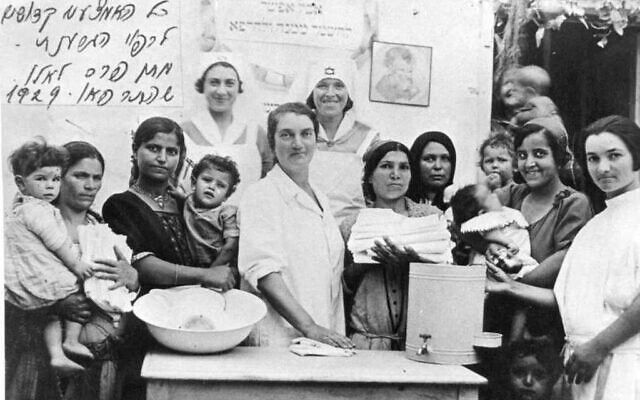 A clinic for babies and young children in Jerusalem in 1929 during a campaign against trachoma. (Courtesy Kenneth Collins)

As over the centuries, different peoples fought over the Holy Land — including Babylonians and Israelites, Muslims and Crusaders, Ottomans and British, Israelis and Arabs — conflicts became an unfortunate reason for many medical innovations. A chapter on military medicine reflects this, written by a former chief surgeon general of the Israel Defense Forces, Eran Dolev. 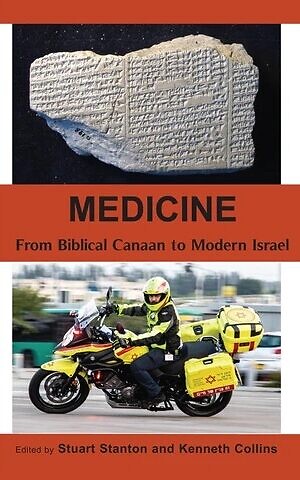 Although the book contains a great deal of history, there is only passing mention of the medical accomplishments of ancient Egypt, and no mention of Jesus, the famed healer of the New Testament and Christianity — although it brings up the Mandate-era Jesus Hilfe asylum for leprosy in Jerusalem.

Of Egypt, Collins said, “the movement of health conditions flowed in both directions. Egypt was much more populous and prosperous. People relied on Egypt more than Egypt would have done in the opposite direction.”

He likened the biblical esteem for Jesus as a healer to that of Rabbi Aryeh Levin during the British Mandate period and Israel’s early years: “[People would] go to him for a blessing. He would say to people, ‘I’ll give you a blessing. Go to the doctor.’ … It was a model of good religious leadership.”

The narrative refrains from covering the contemporary Israeli-Palestinian conflict. “I’m a medical historian, not a commentator on current issues,” Collins said, adding, “It isn’t a political tract.”

He noted that there are chapters mentioning Israeli Arabs, including one on comparative health and disease among Jewish and Arab populations in Israel. The chapter on emergency medicine notes that the Magen David Adom has aided the Palestinian Red Crescent.

Asked about future trends within Israel, Collins invoked Israel’s national airline El Al, saying, “Onward and upward. The country really has developed a reputation for innovation — for startups, for marketing know-how to make developments. Build on the research.”

This article contains affiliate links. If you use these links to buy something, The Times of Israel may earn a commission at no additional cost to you.