Abdul Waheed, Ph.D., is emeritus research professor in the Department of Biochemistry
and Molecular Biology. Photo by Maggie Rotermund.

The gift is in honor of William Sly, M.D., former chair of the Edward A. Doisy Department of Biochemistry and Molecular Biology and emeritus professor in the School of Medicine. It will support the future Centennial Chair in the Department of Biochemistry and
Molecular Biology, which will celebrate the department’s upcoming 100th anniversary. The chair is not yet endowed; $1.5 million has been raised to date, and the department
aims to secure the remainder of the required $2 million in funding by the department’s
centennial in 2024. In recognition of Dr. Waheed’s gift, the endowed position will
be called the William S. Sly Centennial Chair.

“We are humbled by the generosity of Dr. Waheed,” said Enrico Di Cera, M.D., the department’s
current Alice A. Doisy Professor and Chairman. “His gift is testimony to the impact
of the extraordinary legacy of scientific excellence of the department, which began
with its founder, Edward A. Doisy, and continues to this day.”

“I love Saint Louis University, and I support the research of this institution, notably
in the Department of Biochemistry and Molecular Biology,” said Dr. Waheed. “When I
came to SLU, Dr. Sly became a trusted mentor, and I am proud to honor his legacy through
a bequest. Celebrating the 100th year of the department by supporting an endowed chair
and simultaneously recognizing Dr. Sly is a rewarding experience and essential for
the future of research.”

Over his three decades at SLU, Dr. Sly served as a mentor to many students in the
School of Medicine. 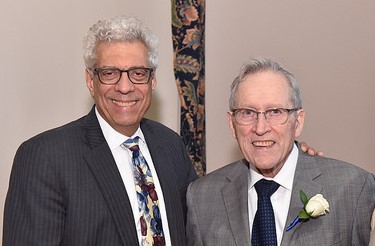 A 1957 graduate of Saint Louis University School of Medicine, he trained in Internal
Medicine at Washington University in St. Louis and in research laboratories at the NIH,
in Paris, and in Madison, Wisconsin. He directed the Division of Medical Genetics
at Washington University-St. Louis for 20 years before joining the Saint Louis University
School of Medicine as Alice A. Doisy Professor and Chairman of the Edward A. Doisy
Department of Biochemistry and Molecular Biology.

He chaired the department for 26 years and became an emeritus professor in 2014.

Dr. Sly is a member of the National Academy of Sciences and an internationally known
biochemist and medical geneticist who, in 1973, recognized a rare inherited metabolic
disease known as MPS VII, commonly known as Sly Syndrome. His research led to innovations
in diagnosing genetic diseases, and for thousands, this has meant new treatments for
once crippling and/or fatal diseases.

Founded in 1818, Saint Louis University is one of the nation’s oldest and most prestigious
Catholic institutions. Rooted in Jesuit values and its pioneering history as the first
university west of the Mississippi River, SLU offers more than 12,000 students a rigorous,
transformative education of the whole person. At the core of the University’s diverse
community of scholars is SLU’s service-focused mission, which challenges and prepares
students to make the world a better, more just place. For more information, visit
slu.edu.